In October 2005 the elections within the Conservative Party of the United Kingdom were held to elect a new leader, since on October the 7th Michael Howard, the former head of the party, formally resigned. Four candidates aspired to be his successors: Kenneth Clark (65), David Davies (57), David Cameron (39) and Liam Fox (44).The question asked by my long-term client from the Great Britain read: “Will Kenneth Clark pass into the second round of the elections or potentially even win and, if not, which one among the four candidates will be the new head of the Conservative Party?”. The question was received as an e-mail on October the 14th 2005 at 11:56 PM in Belgrade, Serbia.

My client lived in the same area as Kenneth Clark, so I automatically assigned him the first house of the chart, (the rationale being the client’s identification with the matter inquired about) with Leo on its cusp. The other three candidates belong to the 7th house of the chart, its cusp falling in Aquarius and I had to assign the ruler of this sign and its triplicity rulers to the three remaining candidates. Since the oldest among them, Clark, was already signified by the Sun, I assigned Saturn to David Davies, the oldest of the remaining three; the first ruler of the airy triplicity in a nocturnal chart, Mercury, was assigned to David Cameron (the youngest of all) and the third ruler of the airy triplicity, Jupiter, signified Liam Fox. My answer regarding Kenneth Clark was simple and straightforward, predicting he wouldn’t pass the first round of the elections and that the youngest among them, David Cameron would win, his significator Mercury occupying the best position and having a direct and good relationship with Mars, the ruler of the MC and the natural significator of the 10th house. The Moon, the most important significator in a horary chart, is separating from Mercury in Scorpio in the 4th (the end of the matter inquired about) linking him with Mars, the planet he applies to next. Although retrograde, Mars, in my opinion, did receive the Moon’s light by being located in the sign of her exaltation and triplicity (Taurus).The significators of the other two candidates, Saturn and Jupiter, were both angular, but Saturn was essentially severely debilitated and Jupiter combust and almost peregrine. Moreover, neither of the two was directly linked neither to Mars nor to the Moon, the leading luminary of the nocturnal chart. The Moon in this chart also rules the part of glory posited at the end of Cancer, further emphasizing the importance of Mercury. Obviously, the Moon in this chart plays a twofold role of being the primary horary significator of the outcome and the dispositor of the part of glory. Equally, the part of fortune is closely aspected by Mercury. As we can see, Mercury is characterized by fourfold emphasis – he is angular, not essentially debilitated, joined to the Moon and linked with Mars by being located in his domicile and triplicity and he aspects the part of fortune.

It was not hard for me to predict that the youngest of the candidates will win and become the new head of the Tories. Liam Fox was eliminated in the second round of the election, and in the final round on December the 12th 2005 Cameron competed against Davies, winning as much as 68% of votes. Mercury has a clear advantage over Saturn in this case, although Saturn also applies to Mars by antiscia; but the Moon being the fastest heavenly body and the main significator, connected directly with both Mars and Mercury, easily brings victory to the candidate signified by Mercury. Early degrees ascending suggested the question had been asked prematurely, before the inception of the first out of three election rounds. The trine between Venus, lady of the 4th, and Saturn shows that Davies manages to enter the final round, but he ultimately fails because of Mercury’s stronger position and better qualifications (Cameron). 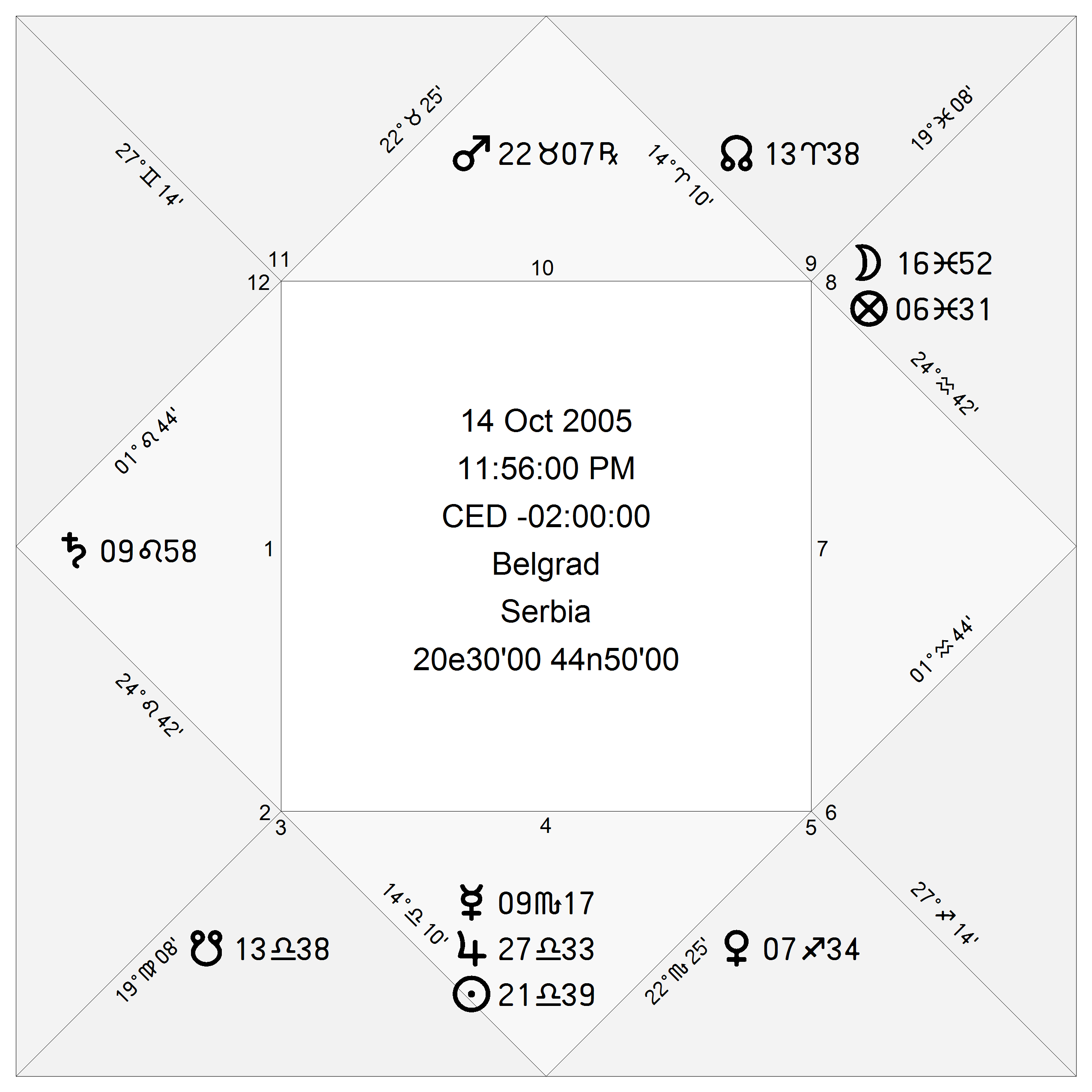