There are three kinds of horary charts: horary question charts, horary event charts and horary news charts. The rules are, to a certain degree, different for each of them. This is an example for a horary event chart constructed for a moment of formal contracting a marriage. It happened in London at 12:00 PM on February 27th 2004.

In this kind of event charts, the husband is presented by the sign of the ascendant and Sun, a general male significator, and the wife is presented by the sign of the descendant and Venus, a natural female significator. Moon is a main significator of the whole horoscope image and in its separation it additionally describes the man and in the application it describes the woman. The medium caeli shows the general picture of marriage. The opposite part of the medium caeli, the point of the northern meridian, shows the final result of things questions. It is marriage in this concrete case. 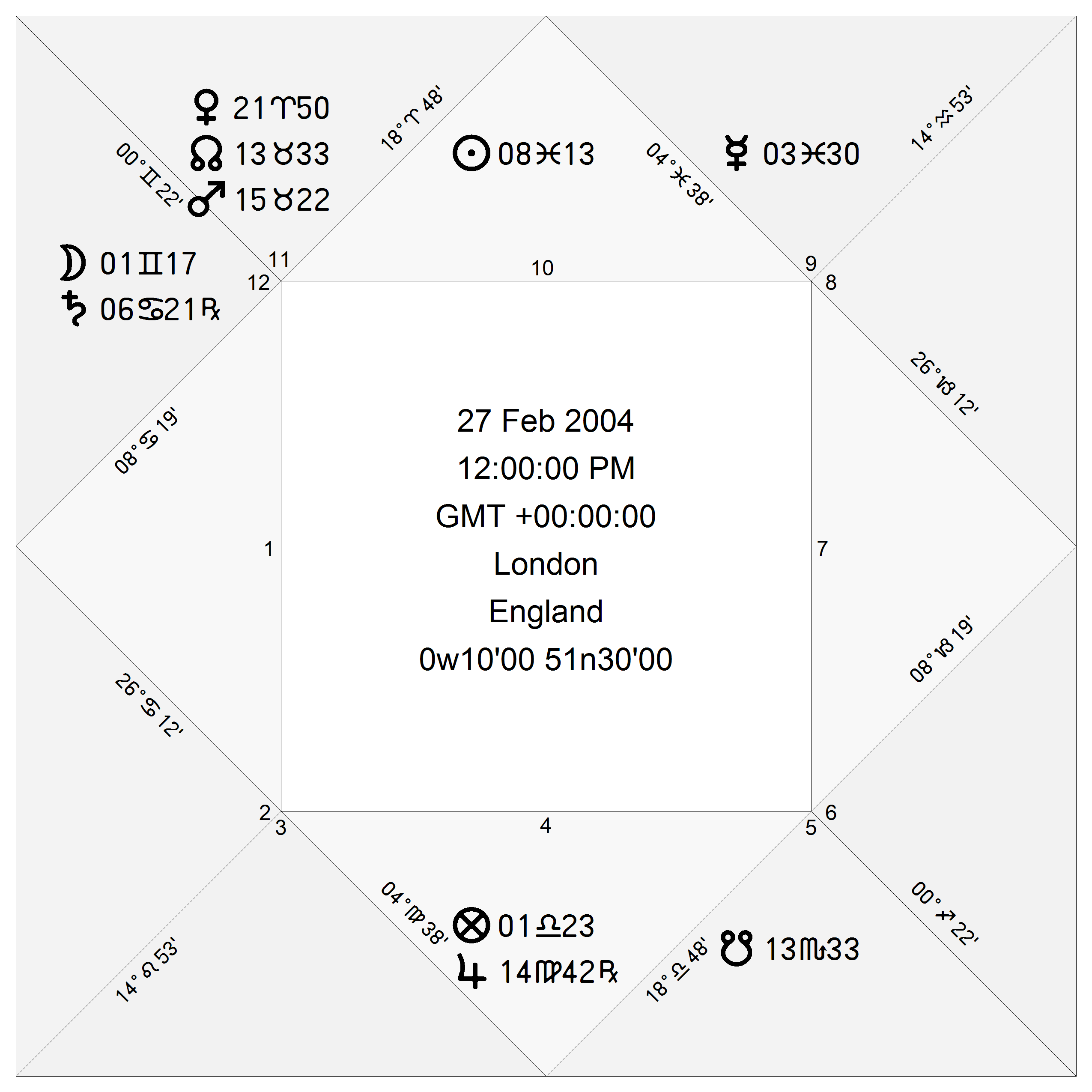 So, in this chart, the husband is presented by Moon, the lord of the sign on the ascendant, by Sun in Pisces and by the debilitate Mars in Taurus with which Moon made the last aspect. The significators of the wife are the debilitate Saturn in Cancer, the debilitate Venus in Aries and the debilitate Mercury in Pisces. At first sight, the numerous zodiacally badly placed planets show the bad destiny of this marriage. The state of husband’s significators symbolizes a culpable man (the peregrine Moon in XII mundane house of the chart in disposition of the debilitate and combust Mercury in Jupiter sign), inclined to some kind of dependence. In his case it was alcoholism. It is interesting that the debilitate Jupiter, the traditional significator of alcoholism, specifically shows this vice in the retrograde opposite connection with Sun in Pisces. The wife’s significators, the debilitate Saturn in the cardinal sign and the debilitate Venus in the cardinal sign as well, symbolize choleric nature, expressive impatience, insufficient tact, tolerance and the lack of empathy. Venus in Aries shows its negative face which often manifests through the lack of adaptation and the low level of tolerance in traditional astrology. Since the whole horoscope image is very bad, it was necessary to analyze several planetary cycles for a few years. Two degrees of the difference between Saturn and the ascendant rudely make the predictive border narrower on two to four units of time, probably the year since the luminar of this event Sun has a high mundane position. The first check was in 2006 through the cycles of secondary progressions, profections and transit synodical degrees of heliacal illuminations of the relevant planets. Since Saturn is on the first mundane angle of this horoscope, it was easy to see the degree of its synodical conjunction on 14 degrees of Lion that falls in almost exact square with Mars of the horary chart, the lord of the event hour. This conjunction between Saturn and Sun happened on August 7th 2006 (the new synodical cycle of Saturn started because of this conjunction). The conjunctive synodical cycle is significant because of the heliacal rising of the planet. It refers to its orientation when a planet becomes visible in the night sky immediately before the sunrise by which it gains great power. Since the horary Saturn is very bad, its starting potential becomes active by means of this cycle. In August 2006. Moon of the horary chart changed the zodiac sign in progression by which its initial position became active from XII malefic house. Since two cycles showed August 2006, it was also desirable to check the third predictive cycle which was reduced to annual, that is, monthly profections (it was my choice). Profections for the period from 27th July till 27th August 2006 equalized the horary ascendant and the horary VIII house referring to ends and terminations of different kinds. It wasn’t difficult to predict divorce just for this period as a consequence of expressive incompatibility of spouses, intolerance and egoism of one spouse and alcoholism of the other one. It happened just like that.

[This example is announced with the client’s permission.]