The story about the conjunctions with the Sun is as old as astrology itself. However, cazimi (“zaminium” in Persian) is not especially emphasized as a unique situation and qualification by the many early astrologers. Ptolemy discusses in detail all the possible aspects with the Sun and the theory of the heavenly sphere in his “Almagest”, but the only thing he holds fast to in his “Tetrabiblos” are the heliacal positions. In Book the First, Chapter XXIV, he states:

“It appears, therefore, by the whole of what has been already delivered, that the effective influence of the stars must be considered as arising not only from their own peculiar natures and properties, but also from the quality of the surrounding signs, and from configuration with the Sun and the angles; all which has been pointed out. The influence of each planet, however, is strengthened chiefly when it may be oriental, swift and direct in its proper course and motion for it has then its greatest power: but, on the other hand, it loses strength when occidental and slow in motion or retrograde; as it then acts with smaller effect.”(“Tetrabiblos”, Claudius Ptolemaeus, AstroLab, Zemun, 2002)

Ptolemy’s theory of the epicycles served as a model for the explication of the variations in speed and direction of the apparent motion of the planets. In this system every planet was assigned one epicyclical circle which moves simultaneously with the referential, big circle called deferent, in the direction west – east. When a planet is situated in the outer half of the circle then it is farther from the Earth, swift and “adds to its motion.” When it is situated in the inner part of the epicycle, it is closer to the Earth, moving apparently in the opposite direction because of which its speed decreases (the first station and retrograde motion). Pondering on this, Ptolemy emphasizes the importance of these epicyclical positions three or four times in his book, which influence not only the speed, but also the visibility of the planet regarding the solar diurnal points. This brought forth synods, the planetary conjunctions with the Sun, but also another thing, the qualification of the same. Later in astrology this topic is more thoroughly expounded through the different kinds of conjunctions with the Sun. The question is, why 17 degrees, 8.5 degrees and 17 arc minutes define such three possible situations. 17 arc minutes represent the supposed radius, that is, the half of diameter pertaining to the visible solar disc, so the arc distance between the 9th and the 18th degree longitude from the Sun in both directions (heliacal setting – application and heliacal rising – separation) comprise minimum and maximum values which are required for the planets to lose, that is, acquire visibility on the sky before and after the conjunction with the Sun. This longitudinal space is called “under Sun’s beams” whereas the space between 8.5 degrees to 17 arc minutes within the same zodiacal sign represents “combustion”, which in fact, designates the half-orb of the 17 degrees. In horary astrology the qualification of these situations depends upon the context of the question. In medical questions the application with the Sun is the worst possible signification except in the cases when the signifier of the sickness gets combust, because the proximity to the Sun weakens the force of the planetary manifestation. In other kinds of questions the conjunctions with the Sun don’t have to have a negative meaning because sometimes they symbolize the situations which are still to be developed and elucidated. In love questions combustion, most often, signifies unification, the beginning of a relationship, a marriage, a wedding etc. whereas the conjunction is further qualified through the disposition of the zodiacal position, the aspects of the other planets and the Moon’s motion and disposition. This is of special importance in the charts of engagements, marriages, meetings, etc. In the natal astrology the combustion is far more complicated for interpretation and depends upon several factors: the house in which the combustion occurs (disposition), the house ruled by the Sun and the house ruled by the combust planet. The early astrological writers examine especially the conjunctions rendering a planet visible in the sky and those hiding it entirely. The difference is even made between the morning and evening rising from the Sun’s orb. On the psychological level, the combustion needs to be interpreted according to the planetary natural signification. The decan in which combustion happens is also of great importance as are all close aspects with the planets from various directions (sinister and dexter aspects) because the combustion doesn’t carry the same weight regarding all the zodiacal directions. It is usually worse if it is afflicted by a planet from the earlier zodiacal degree. Since the Sun is a diurnal light it is logical that any connection with it, conjunction included, is more significant in diurnal charts. How great it is and what kind of significance we’re talking about depends upon aforementioned factors. Diurnal and nocturnal planets have different qualitative manifestations which depend upon the part of the day when the chart is created, hence it is not the same if Mars aspects the combustion in a diurnal or a nocturnal chart, from the right or the left side, including disposition or without it, from its domicile or triplicity or the opposite of that. That is, there’s no absolute qualification of the combustion in a natal chart. Often, combustion can indicate the uniqueness of some situation or a person (if it is a natal chart) when separating conjunction follows after heliacal conjunction preceding the birth, whose degree of longitude falls exactly on some factor of the radix horoscope. The inferior planets are far more often in the vicinity of the Sun according to the nature of things, hence it is of great importance for Mercury and Venus when they are at their maximum distance from the Sun because they gain in quality and strength, whereas the superior planets possibly suffer a lot more during the combustion because of the rarity of such astronomic situation. The time when combustion culminates and presents the maximum of its negative effect is usually shown by firdaria, mundane or aphetic period of the combust planet or the planet which is in a close aspect with the conjunction, especially if it is the ruler of the conjunction and if at the same time a new heliacal or half-heliacal cycle of the respective planets is in effect (retrograde transiting points and the degrees of the first emergence of the planet after its invisibility). 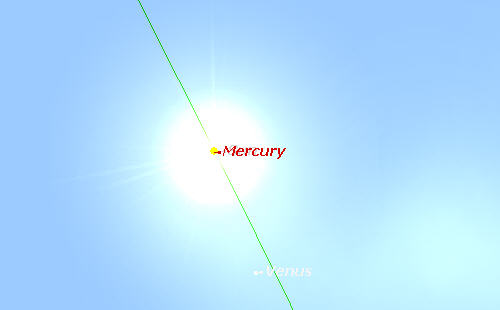 By taking 17 arc minutes as a measure for cazimi we may pose a question what that means regarding the planetary positions in the sky? This is relatively easy to check by a glance to the sky, that is, by some astronomical program which simulates the visible sky in a given moment above a certain position on Earth, where we can easily discern that the planet is located within the solar disc when it is 17 arc minutes or less distant from the perfect longitudinal conjunction. However, it is not always so. It can happen that a planet falls into this area even if it is half degree distant from the Sun in zodiacal measurement. This is possible only if it is very close to the ecliptic because the ‘heart of the Sun” is nothing more than the centre of its visible body, crossed by the line of the apparent motion. Again, we may pose a question whether for the determination of cazimi only longitude is sufficient or we still need the latitude as well? Discussing the aspects in the aforementioned part of “Tetrabiblos”, Ptolemy also states that:

”The same rule obtains both in respect to bodily conjunction and to any other of the aspects before described; except that, in the application and separation of the bodily conjunction, it is also essential to observe the actual latitudes of the bodies, in order to receive and consider only such a transit as may be made in the same parts of the zodiac. But in the application and separation of aspects merely, the same attention is not requisite, since all the rays are uniformly converged into one focus, that is to say, into the angle of the earth, and meet there alike from every quarter.”

Here Ptolemy, by reviewing conjunction, qualifies the same with latitude also, not only with longitude. This example with latitude is most obvious in solar eclipses which happen when the new Moon is posited within the range of 10 degrees from the intersection of the lunar and solar paths (the Moon’s node) that is, ecliptic, when the Moon is without latitude and visually covers the entire solar disc. The Moon is the only heavenly body which can cover solar disc in this manner, considering its apparent size because of its proximity to the Earth. No other planet can do the same even in the case of its zero latitude. The confirmation of latitude’s importance we find in Bonatti’s work as well, who mentions it explicitly in connection with the “zaminium” when he states in his “Liber Astronomiae” that “the heart of the Sun” implies the existence of 16 arc minutes of longitudinal and latitudinal conjunction which is a situation far more rare to be found than one might suppose. In fact, it is extremely rare. This fact implies the dilemma of whether cazimi is sufficiently qualified only by the conventional minutes of longitude or it is necessary to qualify it additionally with latitude as well. My personal experience leads me toward considering latitude also because the usual cazimi didn’t always provide the expected results (positive outcomes and the qualifications which are in theory usually connected with this conjunction). Cazimi in horary charts is an absolute, beneficent indication, which, unlike the other two conjunctions with the Sun, is not analysed considering application or separation which follow. If the question refers to getting the descriptive information about someone or something, everything coming before or after cazimi is irrelevant. In love questions cazimi symbolises reconciliation, the survival of the relationship, its firmness temptations notwithstanding, hence, the future outcome if the question is the result of some crisis. A simple and clear positive indication. Cazimi is an absolute situation. The combustion and proximity to the Sun are not, these are relative and change in time according to application or separation. Cazimi is the only absolute constant beneficence. The specificity and rarity of the qualified cazimi are best depicted by the so-called transits (transiting conjunctions) of the inferior planets Mercury and Venus, which happen averagely 13 times in 100 year in the case of Mercury, that is, every eight years averagely in the case of Venus. The first historically recorded astronomical observation of Mercury’s transit dates back to 1631. made by the French astronomer P. Gassendi. This special kind of planetary eclipses, when the planets are placed between the Earth and the Sun, thus becoming visible on the solar disc in the manner of minuscule circles, are, astronomically regarded, the true cazimi situations because the planets then have minimum latitude and are almost exactly on the ecliptic, on the same degree of longitude with the Sun. However, this kind of conjunction implies the situation in which a planet is posited between the Earth and the Sun “imitating” the occultation (eclipse) which doesn’t occur because of the planet’s size. The usual conjunctions of the inferior planets with the Sun posit these planets behind the Sun from the Earth’s perspective. Transiting conjunctions are interesting because they fulfil both of the preconditions for a real cazimi: the visibility on the solar background and minimum latitude. The fact that the conjunctions with the Sun are derived from the heliacal cycles of the planets which date back to the oldest astrological era of the first visual astrology, leaves us in the dilemma of whether their existence necessarily requires the actual heavenly situation which we may easily discern by observing the sky or the conventional 17 arc minutes are all that is needed.